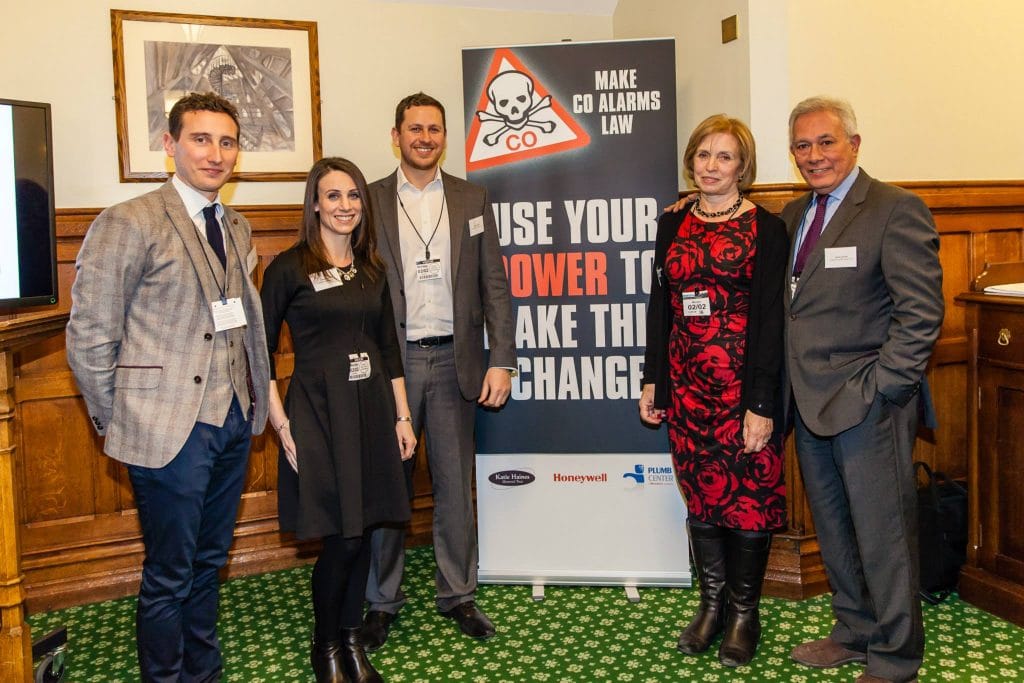 Save lives now. This was the challenge to MPs at a House of Commons reception on 2nd February, staged by campaigners who want to see carbon monoxide alarms in every home in England and Wales. The ‘Make CO Alarms Law’ campaign is being led by Plumb Center, Honeywell and the Katie Haines Memorial Trust.

The event gave parliamentarians, invited guests and our Patrons  the opportunity to see our new hard-hitting film Wake Up! Buy a Carbon Monoxide Alarm which graphically illustrates why CO is an indiscriminate threat, which can kill in minutes.

Avril says: “Katie’s death spurred us to try and make a difference. We believe it is vital for the law to change so as to protect others from suffering the same fate as Katie. We feel it is the most important thing we have done in her memory.”

Gordon made an impassioned speech to the attendees: “Katie was a journalist and if this had happened to any of us she would have moved heaven and earth to raise awareness. We won’t rest until everyone in the UK understands the dangers of CO, and takes steps to ensure they don’t fall victim to it. This is why we are calling on the Government – and all political parties – to wake-up, take notice and change the law as soon as possible.”

Gail van Dijk, ‘Make CO Alarms Law’ Campaign Manager at Plumb and Parts Center said: “We hope politicians will act decisively because this is a matter of life and death. “Scotland and Northern Ireland have already changed the law and we are calling on the Government to follow suit and change the law in England and Wales. With the General Election just weeks away, we are also calling on all political parties to make a clear manifesto commitment to change the law and raise awareness of the deadly threat of carbon monoxide poisoning.” Adrian Keats, Honeywell’s National Account Manager, said: “Getting the law changed will save lives so we need to shout the safety message from the rooftops. We’ve been working with the Katie Haines Memorial Trust for several years and Katie’s story is heart-breaking. Surely it’s time to put an end to these needless tragedies.”

KHMT would like to thank our patrons, Helen, Countess of Rosslyn, Peter Osborne and Lord & Lady Tanlaw and the makers of our new film, Susannah Hayes and Lee Goulding, for supporting us at this event.