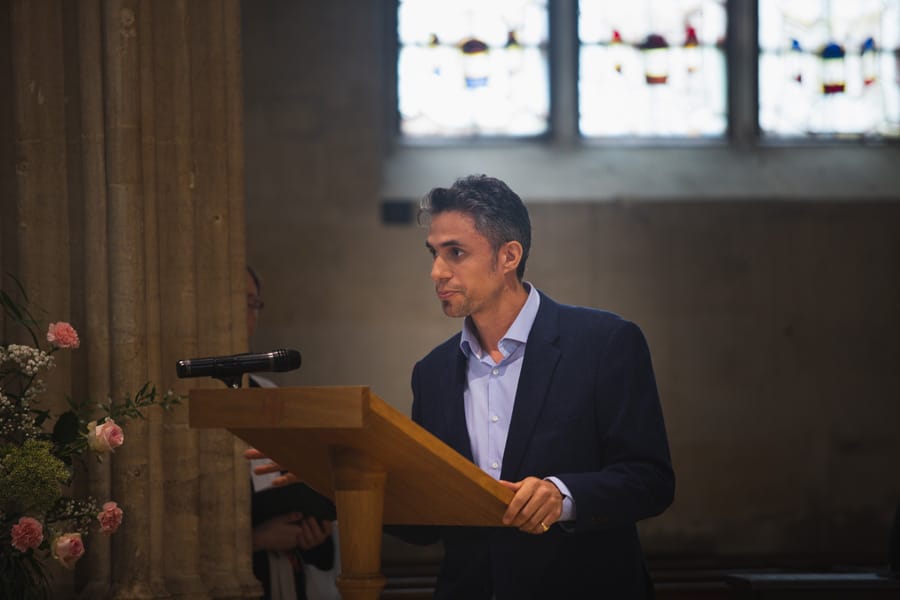 I know that many of you were here just over nine years ago in St Mary’s when I spoke at Katie’s funeral. On that occasion, I tried with difficulty to pay homage to my big sister – partly a result of the utter devastation and disbelief, but also because it’s not easy to sum up everything my sister meant in a couple of pages.

One of the first things that struck people about Katie was her huge smile and big brown eyes – and those that knew her well will fondly remember her uncontrollable, infectious laughter.

There was a lot more to my sister though, aside from her eye-catching beauty, smile and laughter. She was thoughtful, determined but could also be a little stubborn!

From a young age she always wanted to be a journalist. When her dream finally came true after sheer hard work, she set about helping others follow their dreams. Over the last nine years we’ve heard from journalists that Katie had spoken to in forums about how when they were starting out in their career she would offer to meet up with them to offer advice over a coffee – her love and passion for her chosen career inspired many of them to keep going too.

Aside from working hard, Katie also liked to play hard and had a thriving social life. Even before Facebook and Twitter came on the scene she managed to keep in contact with pretty much everyone she had met at primary school, secondary school and university as well as her many contacts and friends from the magazines and newspapers. Sophie, one of her oldest friends from Sutton High told us that ‘she was the pivot that kept their group of friends together’ and that she ‘ learnt a lot about friendship from Katie’.

Growing up, Katie was independent and determined to make her own way with little financial support from my Mum and Dad. I remember when I was about 11 she would get up at the crack of dawn to go out and do a paper round or two. She carried this on until she was about 18 and by that time had built up a nest egg from the £2.50 a day and £5 from delivering the heavy papers on Sundays – not to mention all the tips from happy customers.

Surprisingly, Katie even managed to break some hearts at 6.30am in the morning despite being sleepy eyed and lugging around her paper bag. One morning she came home with a note that read “for the paper girl with the brown hair from the paper boy with red hair – would you like to go out with me?” She did write a response letting him down kindly.

During the school holidays, Katie not one to sit back and relax – would be either temping, often at Farmers Weekly with mum, working in the local gym on reception or babysitting and sometimes juggling several of those jobs at once. Unlike Lydia and me, she decided against taking a year out after school or after uni in order to get ahead in her chosen career. Once she’d broken into the world of journalism, it wasn’t uncommon for her to work during the day on one newspaper and then do the nightshift on another. Another friend remarked that she didn’t let anything stop her…if she was afraid of anything you never knew it because she just acted without fear and threw herself into new challenges.

Despite all her qualities, like everyone Katie had her flaws. She could be quite set in her ways and stubborn – probably a trait she inherited from our Grandmother Doris. For example, for some reason she didn’t like David Beckham (probably because he played for Manchester United and we supported Arsenal). When there were rumours that Beckham might come to Arsenal – she was outraged but I think she would actually quite like him now.

When we were 16 years old and Katie 18 we went on a family holiday to Side in Turkey. Unbeknown to us it was a resort favoured by Germans and neither the hotel staff nor the locals spoke English. Nothing wrong with Germans, of course, but we needed at least a smattering of the language to order drinks in the hotel, speak to taxi drivers and ask for things in the market. Katie, flat out refused to any speak German the whole trip. “we never wanted to learn German at school Dad, you made us”. Even when we got up really early, we could never get a sun lounger. One evening we went to the hotel disco with Katie and found that at 11pm the sun loungers were already decked out with towels for the next day. Katie was fuming and threw a number of towels in the pool. The angry reaction on the faces of the German holiday makers the next morning was priceless. Dad tried to tell Katie off – but he couldn’t keep a serious face!

Finally, for all those that were close to Katie you’ll know she loved Christmas. Yes she was a little bossy but it was with good intentions. She would start orchestrating our Christmas a full 2 and a half months in advance sending Lydie and me several emails asking us why we hadn’t bought Mum and Dad their presents yet.

She communicated with my parents every day and sometimes more when living away from home – whether by email or phone and my parents would sometimes jokingly toss a coin to see who was going to answer the phone when it rang, because they knew it would be a call from Katie asking their advice on something. But through this they knew how much she loved them. On the day before her wedding she gave them a long poem she’d written thanking them for everything up to her wedding day – I’ll just say a few lines from it:

You’ve been there for me throughout the years

Through all of life’s up and downs

From helping with homework to changing careers

To searching for weddings gowns

So, thank you for everything, for help and support

Through all the planning as the bills grew

Because there’s something to say that cannot be bought

And that’s how much I love you

In the same way, Lydia remembers that when she told the family that Michele had proposed to her, Katie immediately took on the job of wedding planner and took Lydia out for a day’s shopping to look for wedding and bridesmaid dresses. She loved the blue teal bridesmaid dress she was going to wear to Lydia’s wedding and sent my parents a picture of herself wearing it – sadly we never got to see her carry out that duty for Lydia.

On Katie’s hen weekend, she gave Lydia a book called You And Me, in which she’d scribbled down a mix of memories, thoughts and things that reminded her of their relationship. She said: If I didn’t have you in my life, I’d be missing a special person – a sister and friend all rolled into one”.

Katie would always ring us on our birthdays and sing happy birthday down the phone. I miss that and I miss not being able to discuss Arsenal’s victories and defeats. I often get the urge to pick up the phone to have a chat with her after a game.

Similarly, I can remember just days before Katie died I had one of the longest chats I’d had with her in a long while and I relished the fact that we could say anything to each other without getting angry as we might have as teenagers. She was really interested in what I was doing and in turn I loved hearing about what she was doing at her job in Oxford and how she’d settled down to married life.

I returned to work in Spain the day after the funeral and arriving back at my flat I found a package waiting for me in the post box. It was a postcard and present from Katie and Rich from their honeymoon in South America. I felt numb when I read her words but at the same time it was rather poignant having this last gift from her.

The huge void Katie left in our lives is still there. However, the internet age and social media means we fortunately have so many photos and videos of Katie that help keep her memory alive. Time doesn’t heal all wounds but our memories and the videos, stories and photos sent to us by her friends have kept her close to us.

Thank you for sharing your memories with us and if you have any more, please send them to mum as she’s compiling a ‘book of memories of Katie’ – which will be something we can show to Alessandro and Danilo when they’re older.